The Willamette Stone and the Baseline Rd Markers

The above stainless steel marker identifies the location of the Willamette Stone. 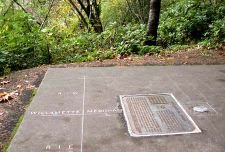 The above plaque is located in Willamette Stone State Heritage Site Park off of Skyline Blvd in the West Hills of Portland, Oregon. This surveying point is the basis for all land claims in Oregon and Washington since 1851. The intersection between the lines on the map below represent the Willamette Stone. 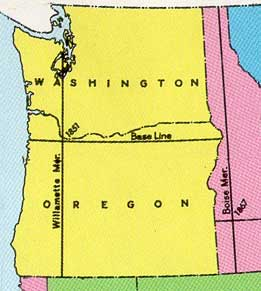 The original Base Line survey was performed by William Ives in 1851. An east-west road was built adjacent to this survey line shortly after this. The road was called "Baseline Road" and was opened to the public on November 24, 1854. Sometime after this (probably during the 1870's), large stone markers carved from basalt rock were placed along this thoroughfare at every mile from the Multnomah County Courthouse (originally built in 1866) out to the Sandy River. There were 15 original stone markers. Nine stones remain while six have been lost. Each stone is approximately 6-feet long and weighs a hefty 500 pounds. The stones are tall, four-sided shafts of carved rock that taper towards the tip. Each is buried with only the top 2 to 3 feet above ground. Each stone is beveled at the top in a pyramidal fashion. These special stones or obelisks are very historical and remind us of how much travel has changed in the last 150 years.


Heading Out of Town

Imagine starting your journey from downtown Portland out to the Sandy River back in the day with a ferry ride across the Willamette River on the Stark Street Ferry. After docking on the east side of the river near SE Oak Street, you would depart the ferry and travel over a long, wooden trestle until you reached Base Line Rd (approximately where MLK Blvd and Stark Street are today). From here, you would follow the dirt road due east (with the aid of a horse or wagon) to the Sandy river using the stone mileposts as beacons to guide your way. These stones were welcome sights to road travelers acting like mileposts indicating your progress. Before Base Line Rd was built, there were only 2 roads leading from Portland on the east side of the Willamette River. Base Line Rd was later renamed Stark Street.

More about the Obelisks

Each stone marker is unique. Some of the stones are pointed at the top (P7), others are flattened (either by design or trauma over the years). Each has the "P" and the it's number hand carved so they are all different. The "P" stands for Portland. Some stones are weathered and some lean (P14, the one by Mt. Hood Community College). One stone has an iron rod attached to it (P5 on 78th). One has a banner above it (also P5) while another has a nice plaque next to it. The majority of the markers are located on the south side of Stark Street. The two exceptions are the markers at 61st (P4) and 117th (P7). When the mileposts were initially placed, they all occupied the south side of Baseline Road/Stark Street. Most of the stones have been painted yellow or white at some time. Some of the stones have a square, concrete base (P7 and P8). It is doubtful that any of the markers occupy their original location. Stark Street has been widened many times since the original construction of Baseline Road. It is thought that most of the stones are within a few feet of their original locations. Some of the obelisks seem to have a caretaker (Thank you David Douglas Historical Society!) while others persevere. These old mileposts are some of Oregon's oldest monuments. The stones are probably close to 150 years old! Mileposts P4 and P5 are listed as Historic Landmarks for the City of Portland. They are classified as street furniture.

There are many theories about the stones. No one is sure who put the stones in and when. According to available data, it is likely that the stones were laid out and set in the 1870's by the U. S. Army from the barracks/depot near S.W. Front and Madison. Measurement being made with a one-mile rope wound around the axle of a wagon. It also seems likely that there were mile markers in place along the four main routes from Portland. These routes would have been the most traveled roads leading from Portland in the main directions of north, south, east and west.

North Route: The north mileposts would have been laid out along St. Helens Road (current US Hwy 30). There is documentation that indicates the presence of 3 mileposts at the following locations: P3 at NW 31st Ave; P6 at 6600 block and P9 opposite of the playground north of Linnton. I have been unable to find these stones.

South Route: The presence of one remaining stone gives a clue to the possible existence of mile markers along Capitol Highway (one of the state's oldest paved roads). P7 is located at the Capitol Hill Branch of the Multnomah County Library at 10723 SW Capitol Highway.

West Route: Speculation would lead to a route along the Sunset Highway, Burnside Street or Jefferson Street.

Finding the original alignment of these roads when these stones were set in place would give a idea where the missing markers could be found.
Posted by Jeff. You can email me at: rumblefish351@aim.com at 3:55 PM 7 comments: This marker is embedded into the wall of the Lone Fir Cemetery. Notice the detail with the "P" and the "2". Also notice this marker was painted yellow at some time.


The History of Stark Street

As noted above, SE Stark Street had its early beginnings as an old wagon road called Base Line Road. The historic street was named for Benjamin Stark (1820-1898), a US senator from Oregon. In the survey of Portland, dated 1852, Stark Street is listed as an original street to downtown Portland. In Jan of 1892, a section of Base Line Rd was changed to Stark Street. This included all roadway from the east bank of the Willamette River to the Lone Fir Cemetery (21st Ave). In 1912, the Stark Street name was extended out to Montavilla (75th). It appears that for a time, the roadway went by both names. In the early 1900's, it was called Stark Street within the Portland City limits and Base Line from the edge of the city out to the Sandy River. In 1920, an attempt was made to change the name of Stark Street to Wall Street. This idea was fought and ultimately defeated. The building of the Morrison Bridge in 1887 and the removal of tolls in 1895 put an end to the Stark Street Ferry in 1895. In 1900, SE Stark Street was a gravel road and Base Line was a dirt road. Stark Street has undergone many improvements (widening) over the years. The inner portion of Stark was paved in 1915. The street was widened to a two-lane road and paved from 82nd out to Burnside St (near Gresham) in 1929. 
Restoration and Preservation of the Stones

An organized attempt to locate the 6 missing stones should be done. It is possible that some of the stones may be along the roadside with the top portion missing. The tops may have been sheared off during road widening or perhaps a marker met with a stray truck on the wrong day. If the stones are buried under the pavement, they are probably gone for good. If, however, the lower half of a stone is found, a restoration process could be performed to repair the stone. If the stones can't be recovered, a new stone could be placed in the proper place. It would be too expensive to chisel a new 6-foot stone, but a cheaper, shorter stone could be used (maybe a 2-foot marker with a square base) in its place. Perhaps new markers could be made with concrete and some simple forms. A cemetery or grave stone retailer may have some ideas as well.

These markers are also in need of a good cleaning. Many of the marker's identifying numbers cannot be recognized from even a few feet away. Water with a soft, natural bristle brush would be a good start. The use of a pressure washer is not recommended as it can remove and damage the basalt stone.

The P14 stone needs to be straightened. It leans badly and could use some attention. This stone is located in the NE corner of Mt. Hood Community College and is in a very accessible area.

If you have any information about these historic stone markers, have a comment or question, please contact me at: rumblefish351@aim.com

Should the Mile Markers be restored and preserved? 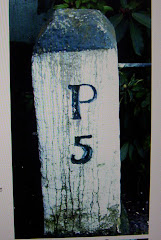 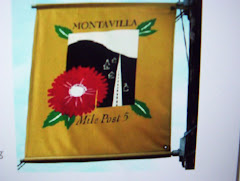 The Multnomah Co. Courthouse in 1920. This one replaced the original building built in 1866.

This is how you would find the markers if you started from Portland and traveled east to the Sandy River along Stark Street. This is a fun day trip and resembles a treasure hunt. The tour begins with the first marker on SE 23rd and Stark Street.

This marker would have been located at approximately MLK and SE Stark Street.

This marker would have been located at approximately 42nd and SE Stark Street.

Located on the NE corner of 61st and Stark Street near the Tabor Heights United Methodist Church. This marker was saved from destruction by a local resident. 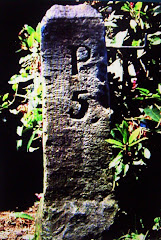 Located at 78th and Stark Street. This stone has an iron hook where an air hose used to hang. The former business owner saved this stone.

Located at 9800 SE Stark Street. It's near Elmer's Pancake House.

This marker is located on 117th and Stark (Ventura Park). This stone was found in a landfill and was saved by Mt. Hood Community College students.

This marker would be located at approximately 138th and Stark Street

This marker would be located on approximately 178th and Stark Street

This marker would be located at approximately 218th and Stark Street

Located on 236th and Stark Street. This stone was rescued by the Gresham Historical Society and reset in 1987. 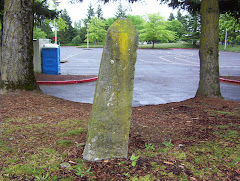 Located at 257th and Stark Street

Jeff. You can email me at: rumblefish351@aim.com
* Named Portland's Best Web Historian by Willamette Week in 2016 *